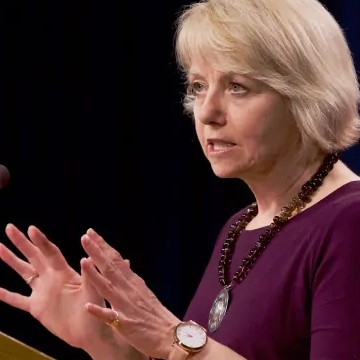 B.C.'s provincial health officer  extended the ban on social gatherings for another month on Thursday, as the province recorded  761 new cases of COVID-19 and eight more deaths.

Dr. Bonnie Henry said the current orders, including a ban on gatherings with people outside of one's immediate household, will continue to apply until at least Feb. 5 at midnight.

"This is the riskiest time right now," Henry said. "We cannot let our guard down as vaccine is just beginning."

Thursday marked the highest one-day case tally since Dec. 2, and comes two weeks after the holiday period, which officials have feared would lead to a rise in cases.

Henry partly attributed Thursday's spike in cases to changes in how the province collects data, but she cautioned the province's curve is trending upward.

The extended order, which covers two COVID-19 incubation periods, applies to all in-person events and gatherings, including religious gatherings, musical performances and screenings at movie theatres.

People who live alone can continue to see one or two people in their bubble.

The province's non-essential travel advisory remains in place, including travel into and out of B.C., and between regions.

Tighter restrictions were first imposed in the Vancouver Coastal and Fraser Health regions on Nov. 7 and expanded to the rest of the province on Nov. 19.

The regulations had been set to expire in early December, but were extended as cases climbed ahead of the holidays.

"We know that transmission is less likely to occur in these controlled environments that have their many layers of protection in place," she said.

The province has also identified two additional cases of the coronavirus variant first detected in the U.K.

Both are household contacts of B.C.'s first known case, a resident of the Island Health region who has remained in isolation since returning from the U.K. on Dec. 15.

Henry said there are no other contacts and officials don't believe anyone else is at risk of the variant. She said officials continue to monitor for additional cases.

Officials have also announced a number of changes and improvements to B.C.'s collection and release of data around the pandemic.

The province will release weekly case and death counts at long-term care homes, three months after it stopped giving that information.

Positive test information will also be directly automated into the province's data system from lab results, rather than go through separate health authorities.

Officials say the move will allow new data to be provided at consistent times each day.